Charcoal Use in Container Growing Media 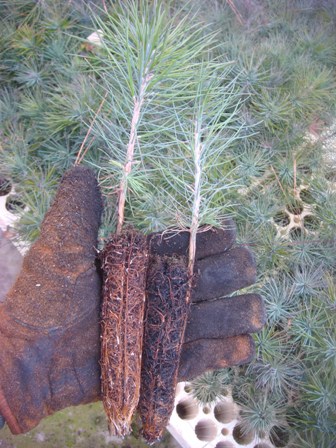 After visiting Richard Haard and Larry Williams in early 2007 I started discussing the use of charcoal with various nursery growers and researchers in the West. A commercial nursery in California became interested in substituting charcoal for vermiculite in a growing media - soilless substrate - for container grown tree seedlings.

There could be both financial and ecological benefits from using charcoal in place of vermiculite. Vermiculite is increasingly expensive, especially in the quantities used by commercial nurseries. Locally made charcoal should be cheaper. Vermiculite has a poor carbon footprint since it is heated to 1000 C (1832 F) in processing and transported long distances, often imported. Charcoal that is made locally as a byproduct of energy production could be used in growing media. Since it would be planted in the forest with the seedling the carbon sequestration would be permanent.

The nursery uses a growing media made of combinations of peat (50%), bark (20%) and vermiculite (30%). Bark is a common material in Northwest nurseries and has been studied extensively. (See Landis, Altland, Buamscha, Scagel). The grower tested seven mixtures substituting charcoal for vermiculite (up to 30% of the mix) and substituting compost for peat, another expensive substrate.

Each blend was placed in two Styrofoam blocks containing 112 plants for a total of 896 plants including the control. Ponderosa pine was grown in all containers.

Charcoal was gathered from mixed conifer burns in a local watershed. It was crushed and screened through a 1/4 inch (6 mm) screen.

At the time of my visit last week both plant health and root growth looked the same for the 30% char and 30% vermiculite. Root plugs were firm. The grower is both surprised and satisfied with the success of the charcoal substitution and will be doing further testing after a closer evaluation of the plants.